I saw this tweet from @markgr and had to write about it. 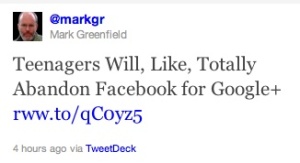 The reason being, I don’t believe Google +, Diaspora or any other new social media tool has a chance until the come up with something completely different.   I wish it wasn’t true, but all we have to do is look at recent history to see that it probably is.

All of these new ideas are just Facebook repackaged.  Google Wave, Google Buzz, Google +, and Diaspora when distilled down to their basic structure and interface are all Facebook.  There really isn’t anything different.  Unfortunately, the one thing that they don’t have is the crowd.  And they’re not going to get the crowd, until there’s a crowd there.  There won’t be a crowd there until the product is actually new.

I’ve been on all five of the above.  Here’s how my experience has gone:

1. Get hooked on the buzz that this is finally the revolutionary social network that is going to connect me with my friends without being evil.

2. Get the email saying that I’m part of an early beta testing group.

4. Spend sometime skimming around the “news feed” equivalent.  Upload a photo or two.  Invite some friends.

5. Check in daily to see what’s new and who has joined up since he last time I checked an hour ago.

6. See that no one else is using it.  Well, not no one.  Lot’s of people in HighEd are writing about how this will change HighEd marketing because this will finally take down Zuck.

7.  Begin checking less frequently—still finding that no one I went to college, high school, randomly know is one.

And that’s it.  Until something revolutionary happens, Facebook is it folks.   It’s just like changing banks because of some outrageous fee their charging.  Yeah, it sucks to pay the fee, but all my stuff is there.  My paycheck is automatically deposited there.  My bills come in through the online banking feature.  I’ve got everything set up.  It would be a pain to change.  Plus I might miss a bill or two in the switch over.

View all posts by drewmillikin