This post also appears at www.edsocialmedia.com.  You should check it out.  It’s decent despite the fact that I write for it.

Charlie Croker: You’ve got no imagination. You couldn’t even decide what to do with all that money, so you had to buy what everybody else wanted.
Steve: Try this on your imagination, okay. That gold is already gone.
From the Italian Job

I came across an unnamed college Web site the other day that looked oddly similar to the Saint Michael’s College blogger page.   At first I couldn’t believe I was seeing such fragrant laziness.  Below is a side-by-side comparison (I did my best to block out the other institutions name so as to avoid embarrassment). 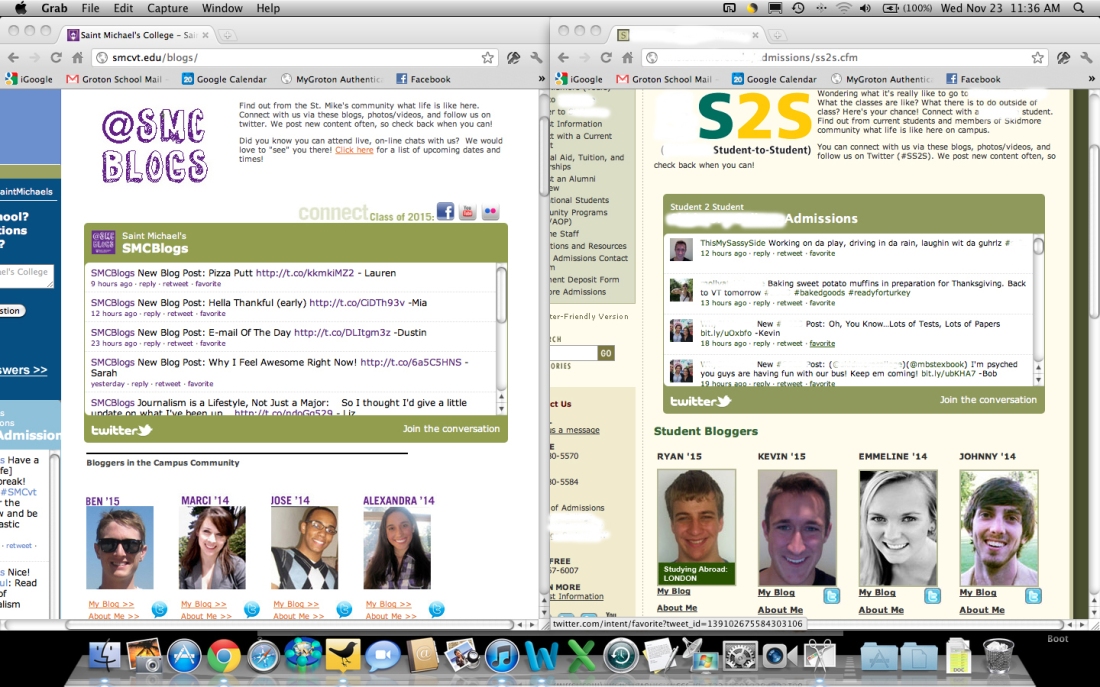 I think this is pretty egregious for three reasons:

1. You have to at least put in some effort.  When I built the SMC bloggers page in 2008, I took a great deal of inspiration from the Butler University blog page.  That page had photos of the bloggers, their names and bios, links to their blogs, and a Twitter feed (that actually didn’t work).  I incorporated each of those into our new page.  At the time my coding skills were relatively limited (still are) so the page came out the way it did.  I’m embarrassed to admit the amount of time I spent building that stupid page.  I know that it took me half a day to figure out how to change the color.   Despite a redesign when @MalloryWood took over in 2010, some of the key design features still hold true.

The point is, you have to own it, in order to make it work.

2. This is cheating.  Literally this is plagiarism.  You’ve taken 90 percent of a Web site, added your name and colors, and published it as your own.  If a student at your institution did the same on a research paper, they would be expelled.   It is the responsibility of the institution live by the same values it expects out of its students.

3.  This damages both brands.  Your applicants overlap.  Small residential, liberal art, college in the north east.  Yup.  That means there will be plenty of cross over between your apps.  It makes the both of you look lame, packaged, and discredits any authenticity you’ve established.  Unfortunately for SMC, this means they need to change their page immediately because this other institution is making SMC look bad through their laziness.

So what about that saying I hear over and over again, Copy And Steal Everything?

Clearly this is said tongue in cheek.  There is plenty of room to allow yourself to be inspired by others, but you have to transform that inspiration into a product that truly reflects your institution and brand.  Social media is all about authenticity, and your ripping off a site from another school, you’re not being authentic.

Pay attention. Look at what others are doing, and figure out how you can adapt them into your own channels. While you’re at it, keep an eye out for those who are ripping you off.

View all posts by drewmillikin